I’m Eduardo Calvo, Editor in Chief of Lunatic Geek, and This Is How I Work

It's hard to come upon an independent point of view when you are looking for technological information. Lunatic Geek is the latest bastion far away from personal or professional interests. Eduardo Calvo is the ultimate of the honest gurus in the IT world. In his blog you can read his controversial opinions about the future of the industry and the technological markets. How does he do it all? And more importantly, how does he do it all and remain so genuine and inspired? We caught up with him to find out.
Current gig: Editor in Chief of Lunatic Geek and RW Labs CFO
Location: Palencia, Spain
Current mobile device: I might be the only geek in the world without a mobile device. This is because in Spain mobile carriers are a pain in the ass so I don't want to deal with them. I've got an iPod Touch, though
Current computer: It's a DIY workstation based on an Intel Xeon server grade processor attached to a 23" screen (TTYs looks so creepy on it) and running on Ubuntu 12.04 within a fast SSD which changes the way I understand the computational power. It really rocks! I hate laptops so I don't have one, apropos
One word that best describes how you work: Randomly

What apps/software/tools can't you live without?

I've just learnt the hard way that there's not any irreplaceable app after the defenestration of Google Reader. The world is full of alternatives we should check out. Now, Feedly helps me manage my RSS feeds. TweetDeck is quite useful but I'm bit disappointed with the lack of support for mobile devices. I use Neutron Drive for collaborative coding because it's nice and uncluttered. Spotify is always on the air in my flat. I played along in the webapp private beta and it's pretty amazing. Everyone should prove it. Of course I use VirtualBox and I love SSH and byobu while I'm working on a terminal.

There you can see my old grandfather's office chair which is so vintage and cozy. The big screen fills my table and I've got a piano keyboard on the side (I can't play piano, by the way). Moreover, there are some mobos and other PCBs on the wall. Some people think it's bizarre but I love it.

What do you listen to while you work?

My playlists on Spotify webapp. Basically I've got a collection of playlists of Scandinavian Heavy Metal and Classical music which I play on shuffle thus I can listen to a song of the latest album from Bullet for my Valentine and then a piano concerto by Beethoven. I really like Beethoven, Verdi, Debussy and any other Classical composer except Bach who makes me poke. The mixture of Heavy Metal and Classical Music looks strange but it's magnificent and emotional. Music is the best way to carry the work on.

I try to not to work twice. There are lots of scripts to automate the work. Of course I love Ctrl-c + Ctrl-v but I think people don't realize how important and useful is copying, even oneself, so I always try to recycle my old work to save time. However, I'd rather invest a while thinking how to work less next time. Work less! This is the purpose of IT, indeed.
Another good trick is using multimonitor rigs because everyone can afford to buy a couple of 80$ screens. I had one when I was more involved in photo edition and it was great.

My mind. It's old-fashioned but it works great for me because I don't do a bunch of different tasks. If I've got a busy week I shall use Google Calendar which is not a proper to-do list.

Besides your phone and computer, what gadget can't you live without?

My Kindle. I could live without my "phone" but my life would be so boring without my Kindle... In the beginning, I wasn't too sure about the new touch screen in the Paper White yet I love it.

What everyday thing are you better at than anyone else? 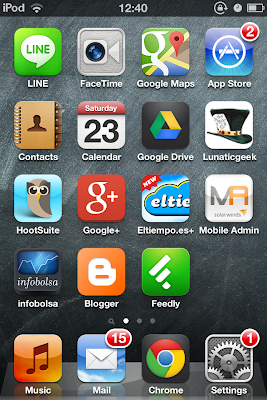 I can do more press-ups than anyone else. I think I may beat some world records.
Pictured at right: Edu's iPod homescreen.

I go to bed at midnight and I'm woken up at 7 o'clock. My alarm tune is the Mighty Morphin Power Rangers theme and I can't imagine another better way to wake up. I've got a love-hate relationship with siesta. I try to elude it but I can't. I suppose it's my fate as I'm spanish.

Are you more of an introvert or an extrovert?

I'm more of extrovert but people don't think so because I'm a bit antisocial. I really work well in team, it's just I don't want because I prefer working alone.

Just enjoy April Fools' day, it was just a hoax!

RW Labs 2020
Powered by WIT, based on Hugo and Whiteplain